This Is A Custom Widget

This Sliding Bar can be switched on or off in theme options, and can take any widget you throw at it or even fill it with your custom HTML Code. Its perfect for grabbing the attention of your viewers. Choose between 1, 2, 3 or 4 columns, set the background color, widget divider color, activate transparency, a top border or fully disable it on desktop and mobile.

This Is A Custom Widget

This Sliding Bar can be switched on or off in theme options, and can take any widget you throw at it or even fill it with your custom HTML Code. Its perfect for grabbing the attention of your viewers. Choose between 1, 2, 3 or 4 columns, set the background color, widget divider color, activate transparency, a top border or fully disable it on desktop and mobile.

One of the most compile letters from Raden Adjeng Kartini is after darkness, comes light.

Kartini was born in a noble family on April 21, 1879, in the village of Mayong, Jepara Regency, Indonesia. During Dutch colonial times, Kartini’s father, Sosroningrat, became the Regent of Jepara.  Kartini’s father was originally the chief of Mayong district. Her mother Ngasirah was the daughter of Madirono and a teacher of religion in Telukawur.

Kartini was the fifth child and second-eldest daughter in a family of eleven, including half siblings. Kartini’s family allowed her to attend school until she was 12 years old. Here, among other subjects, she learned to speak dutch, an unusual accomplishment for Javanese women at the time. After she turned 12 , she was secluded (pingit) at home, a common practice among Javanese nobility, to prepare young girls for their marriage. During her seclusion, Kartini continued to educate herself on her own. Because she could speak Dutch, she acquired several Dutch pen friends. One of them, a girl by the name of Rosa Abendon, became a close friend. Books, newspapers, and European magazines fed Kartini’s interest in European Feminist Thinking, and fostered the desire to improve the conditions of indigenous Indonesian women, who at that time had a very low social status. Kartini’s concerns were not only in the area of the emancipation of women, but also other problems of her society. Kartini saw that the struggle for women to obtain their freedom, autonomy, and legal equality were just parts of a wider movement.

Kartini was married on  November 12 1903.  Since her husband  had understood Kartini’s  purposes, he  allowed her to establish a school for women in the east porch of the Rembang Town Hall area. Kartini’s  had only a son who was born on  September 13, 1904. A few days later on 17 September 1904, Kartini died at the age of 25. She was buried in Bulu Village, Rembang.

Inspired by R.A. Kartini’s example, the Van Deventer family established the R.A. Kartini Foundation which built schools for women, ‘Kartini’s Schools’ in Semarang in 1912, followed by other women’s schools in Surabaya, Yogyakarta, Malang, Madiun, Cirebon, and other areas.

In appreciating Raden Ajeng Kartini’s services to us, BBC English Training  Specialist Tlogosari Semarang Branch has been committing to conduct education for society. Although we have been attacked by Corona Virus Desease (COVID-19), we are still able to convey the message to society that education will not stop in any condition. In the past, in the colonial era Kartini fought for women’ rights for freedom, and now in the modern era or in the covid-19 era, we must fight for  conducting education for society .  BBC  ETS teachers have searched  all the strategies to teach their students. They have applied online long distance learning  or popularly called LDL to connect teacher with the students. As a matter of fact, so far the  strategy is so good. Although the strategy is very much depending on the internet connection, but students supported by their parents mostly participate with the classes. They don’t leave BBC ETS Tlogosari although covid-19 attack us and they say that they are satisfied with BBC ETS services on education. 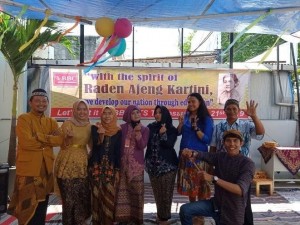 About the Author: yendi